Why do companies relocate to Asia? 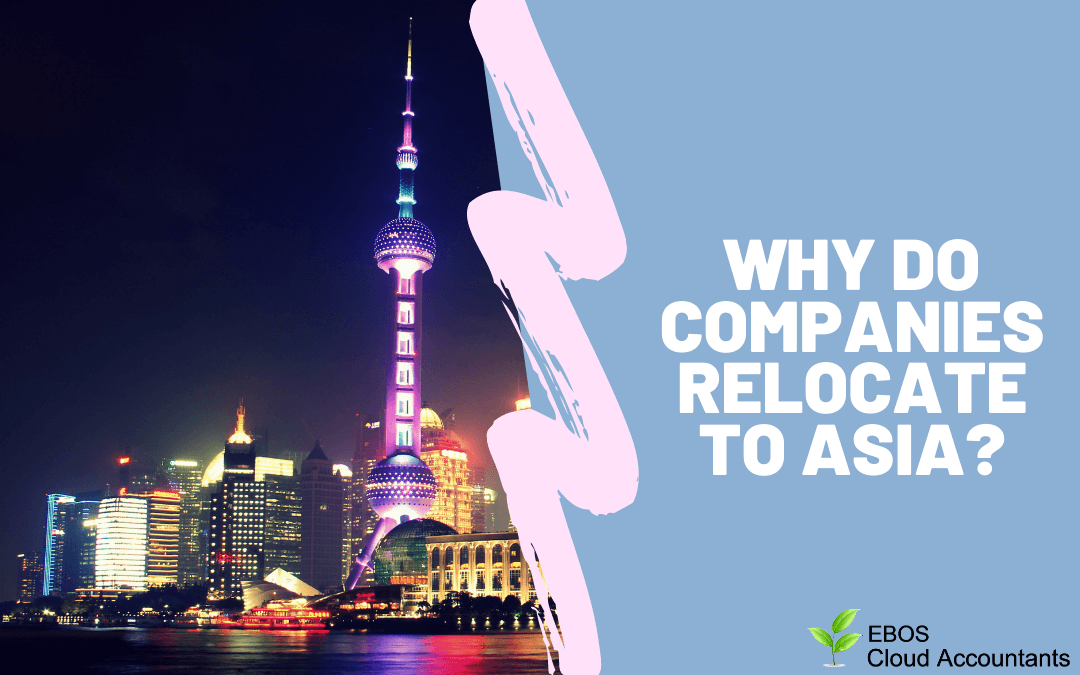 Singapore is a Gateway to ASEAN Countries

Singapore ranked fifth among the top 20 hot economies in FDI inflows, this has made Singapore marked its gateway to ASEAN and is a popular destination for companies of all industry and sizes to have their Asia operations based in Singapore. I will be explaining to you several driving factors contributing to Singapore’s success in bringing in foreign companies to its country.

Singapore is known for its broad network of double tax treaties or tax agreements (DTAs) with more than 80 countries around the world. Double taxes are eliminated, reduced withholding taxes and the preferential tax regime are the key benefits of a DTA. This reduces the tax load on a company to a minimum. Furthermore, the tax on capital gains and dividends would make Singapore a profitable option in Singapore for a business activity for the incorporation of a company.

Singapore has one of the most straightforward and logical tax systems in the world. They do not levy taxes on capital gains or income from a business. This makes the country particularly appealing for entrepreneurs who want to start up a new company.

The highest corporation tax rate on taxable income is 17 percent. Capital gains and dividend income are tax at 0 percent. No withholding tax is charged on post-tax dividends paid from Singapore. All foreign-sourced income is tax-free and is equally significant as long as the income has been subjected to tax in a country with a headline tax rate of at least 15 percent. When they are passed as dividends on to owners, corporate earnings are not double taxable. In other terms, shareholders receive dividends free of charge. Finally, Singapore charges one of the world’s lowest rates of value-added tax.

When they are passed as dividends on to owners, corporate earnings are not double taxable. In other terms, shareholders receive dividends free of charge. Finally, Singapore charges one of the world’s lowest rates of value-added tax.

For skilled and multilingual employees from all over the world, the business environment in this country is very appealing. Singapore’s reputation as the most active, resilient and inspired workforce in the country, as shown also by the figure and rankings of the IMD World Competitiveness yearbook, is strengthened by its quick-moving, creative working climate and local Singapore talent.

There are many types of Visa schemes in Singapore for skilful and certified professionals and businesses. The government is actively working to make efforts to gain foreign investments and improve the level of its local workforce by adding up the top talent from around the world.

Singapore tactical location in Southeast Asia having a location to be at the crossroads of the main trade and all the shipping routes of the world such as the major route connecting India and China. Singapore is known as the center for transport is proud of its award-winning Changi Airport and also features an international port system that has been awarded several times as the “Best Seaport in Asia.”

This nation is also one of the tops in leveraging information and communication technology to enhance its country productivity through the World Economic Forum, thanks to the telecom’s infrastructure at the word-class level. Singapore is ranked in the top 10 of 139 countries worldwide as one of two Asian countries in the recent year.

Singapore is widely known for its superb education system and the high scorers of its student in comparison with global standards around the world. These students gradually become a part of the workforce in Singapore which brings the same excellent attitude to their work which is being hardworking, rule-following, productive and highly educated.

Ease of incorporation and operation

Singapore has a regulatory system that is one of the most powerful and political free in the world. Singapore has been placed first in the World Bank’s Ease of Doing Business survey for nine straight years. The conditions for incorporating a company are clear and the protocol is straightforward. In most cases, a new organization needs less than a day to be formed

Similarly, the conditions for annual enforcement are clear and unnecessary or complex.

Singapore is one of the most stable and prosperous countries in Asia in terms of diplomacy, there are a range of available facilities, public services conveniences, and the global environment is what makes it an attractive destination for foreigners. With its wide range of choices from dining, entertainment, tourist options, best-in-class infrastructure, and many internationally recognized educational institutions and universities that Singapore offers a high standard of living yet still having its homely feeling.

The legal system in Singapore is well-established and has strongly maintained its relevance in the existing cultural, commercial and social environment, by taking into consideration the common law and other best practices from developed legal systems. The country’s legal system has won recognition globally because of its efficiency, integrity, and being the least bureaucratic in Asia. Companies are no stuck in excessive paperwork or slow operations because of bribery or other issues. Singapore’s commercial legal structure is also known for its fair and impartial ways.

In conclusion, Singapore remains an appealing destination for offering a wide variety of businesses.